The County's premier club team event. Open to all affiliated Hampshire Clubs. Finals day for the Semi-Finalists at Royal Winchester on the 25th September.

Please note that courtesy practice rounds may not be available this year as Clubs prioritise their Members.

Please contact the host club to find out if tee times are available at off peak times.

Please email the County Secretary for an up-to-date list of Team Contacts.

The County's Junior Team event open to boys and girls. Teams of three. Finals Day (Last 4 teams) to be played at Hockley on 25th July

(To be used when girls play in a Green Jackets match)

Please email the County Secretary for an up-to-date list of Team Contacts.

Good Luck to all the teams!

Both Competitions have been cancelled for 2020.

The Aldershot club were the first-ever winners back in 1966 – the year England won the World Cup and became the first club to hold the Hampshire, Isle of Wight and Channel Islands Inter-Club Knockout – and it’s ladies equivalent – at the same time two years ago.

And it was Henry Lloyd, who held his nerve to get the better of Lee veteran Dave Edmunds to win at the 20th hole after the fourth match ended all-square and went into sudden-death.

The oldest player in the Lee team had been four up after five but Lloyd, who was getting four shots won the sixth, ninth, 12th and 13th.

Having lost the 16th Lloyd then made a great up and down from a greenside trap to square the match for a second time before the last was halved in fives as the nerves built up.

Edmunds, who has been a member of the Hampshire Seniors team this year, produced a miracle recovery shot from an impossible lie in the greenside bunker on the first extra hole, after Lloyd had to play the par five as a three-shotter because he had left his driver out of the bag.

His third saw him blade his approach through the back of the green, but they both got up and down for their pars.

Their 20th hole saw Edmunds find tree trouble on the right off the tee, forcing him to chip out. He was still short of the green in four while Lloyd played his fourth shot 20 feet from the pin.

Lloyd then two putted for a bogey 6 leaving Edmunds to hole from 18 feet to keep the match going. He failed narrowly to hole the putt meaning that the title was heading back up the A325 for the second time in three years.

Captain James West led the Army team again with five of the team, who lifted the trophy at Bramshaw in 2017, when they beat Ryde, in his line-up.

Having ended Shanklin & Sandown’s hopes of gaining revenge for losing against Lee-on-the-Solent when they won in the final in 2006, the Gosport-based club stood between Rowlands Castle’s record of six wins to Army’s five.

Four-handicapper Talor Reay lost 3&2 to Lee’s Hampshire U16s squad member Will Green, off three, having never been in front after losing the first two holes as Lee put the first point on the board.

Tom Ballard, another winner in 2017, beat Lee captain Kev Smith 2&1 in a battle of the five-handicappers, having been three-up with six to play.

Four-handicapper Chris Taylor fought back from one down in the top match with three to play, to draw level at the 16th.

He then won the last with a four to go one-up against Lee’s Kev Burnop, playing off three.

That made it 2-1 to the Army but Lee’s University of Northwestern Ohio graduate Lewis Scott, the only player off plus in the finals, saw off four-handicapper Alex Carey comfortably by 4&3 – despite giving away six shots – to make it 2-2.

Captain West then won the fifth match 3&2 against one-handicapper Rory Ainsworth, to edge Army back in front, before Lee’s three-handicapper Nick Mitchell, who had been dormie three, beat four-handicapper Paul Kelly 2&1 in the penultimate match.

All the players converged on Edmunds and Lloyd as they headed down the last and back out to the first before the final was eventually settled at the 20th.

A delighted West said: “To win the Sevens again is a fantastic achievement, especially twice in three years and to match Rowlands record after they won it last year.

“Having beaten them 5-2 to reach the semi-finals it was the cherry on the cake to bring the trophy  back to Army Golf Club.

“With five of the players that won the Sevens in the team again, I think our experience of the finals was a big help.”

Royal Guernsey, who lost 5-2 to Army GC in their morning semi, went on to beat Shanklin & Sandown 41/2-21/2 in the third and fourth place play-off.

The “Road to Petersfield” began with a narrow win away at Alresford, when Carey grabbed the vital point in the anchor match.

That was followed by home wins over Meon Valley, 2016 winners Oak Park, and Boundary Lakes before their quarter-final clash with holders Rowlands Castle.

Lee-on-the-Solent also enjoyed a run of four straight home wins to get to the last eight, beating North Hants and Dummer – both 5-2 – followed by a 61/2-1/2 trouncing of Liphook to set up a clash with Hartley Witney.

But home advantage on Lee’s tight par 69 course, which measures 5,962 yards, gave Smith, in his third year as Sevens captain, after 32 years as a member, the chance to take his team to the finals day.

Big thank-you to Petersfield Golf Club for hosting Finals Day. Also thanks to the sixty-seven Golf Clubs that took part in the competition this year.

The line-up for the County Sevens semi-finals is confirmed.

Play will commence at 08.00hrs, both semi-finals from 1st tee.

It's crunch time for the eight remaining teams. One more win and they will be through to FINALS DAY at Petersfield on Sunday 22nd September.

The Green Jackets winners will go forward to represent Hampshire Golf at Woodhall Spa on 12th and 13th August.

The draw for the last sixteen is  complete.

(as of Tuesday 2nd July)

The second round has been completed. The eight quarter-finalists are now only one match away from Finals Day at Hockley on Tuesday 30th July.

Boundary Lakes, Ryde, Army and L'Ancresse are already through to Round Three.

They beat Royal Jersey in the Final played at Barton-on-Sea GC on Sunday 23rd September.

Southampton will take on Ryde and Royal Guernsey will play Army in the semi-finals of the County Sevens at Bramshaw (Manor Course) on Sunday 22nd October.

(as of Monday 4th September). 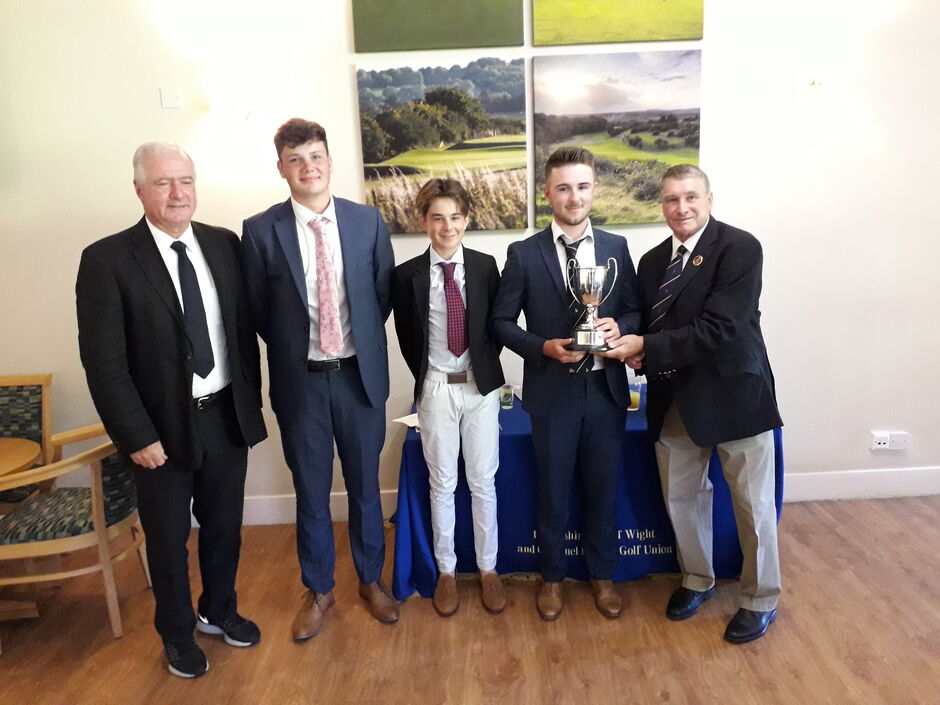 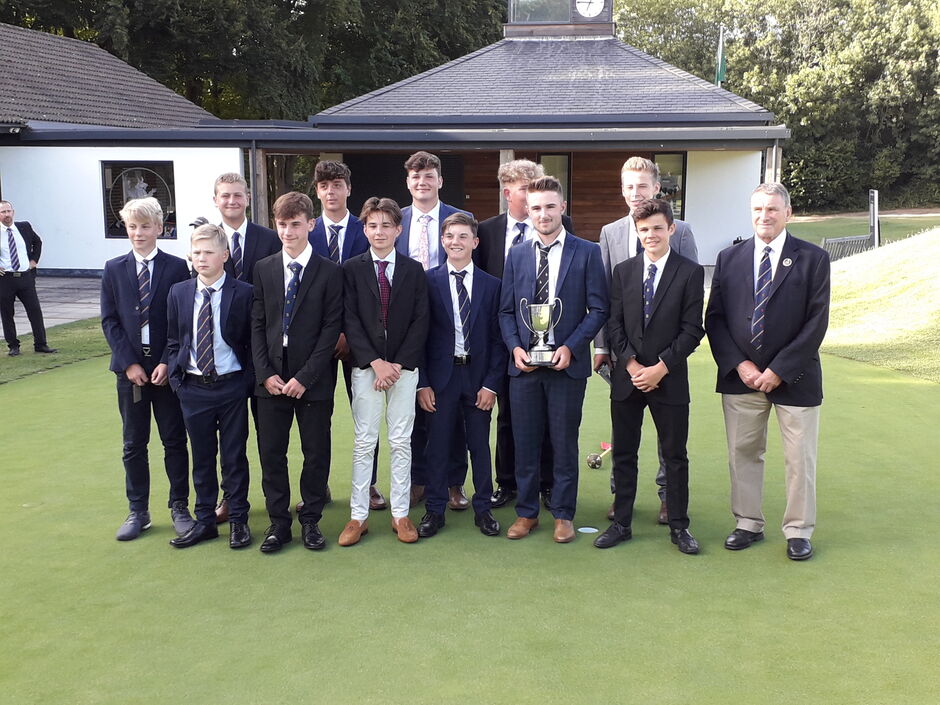 Congratulations to Blackmoor Golf Club, who won the Green Jackets Cup for the first time.

They defeated Dummer in the Final, played at Hockley on 31st July.

Fullers has kindly agree to continue their sponsorship of the COUNTY SEVENS in 2016.

See the full result of the 2015 competition below. 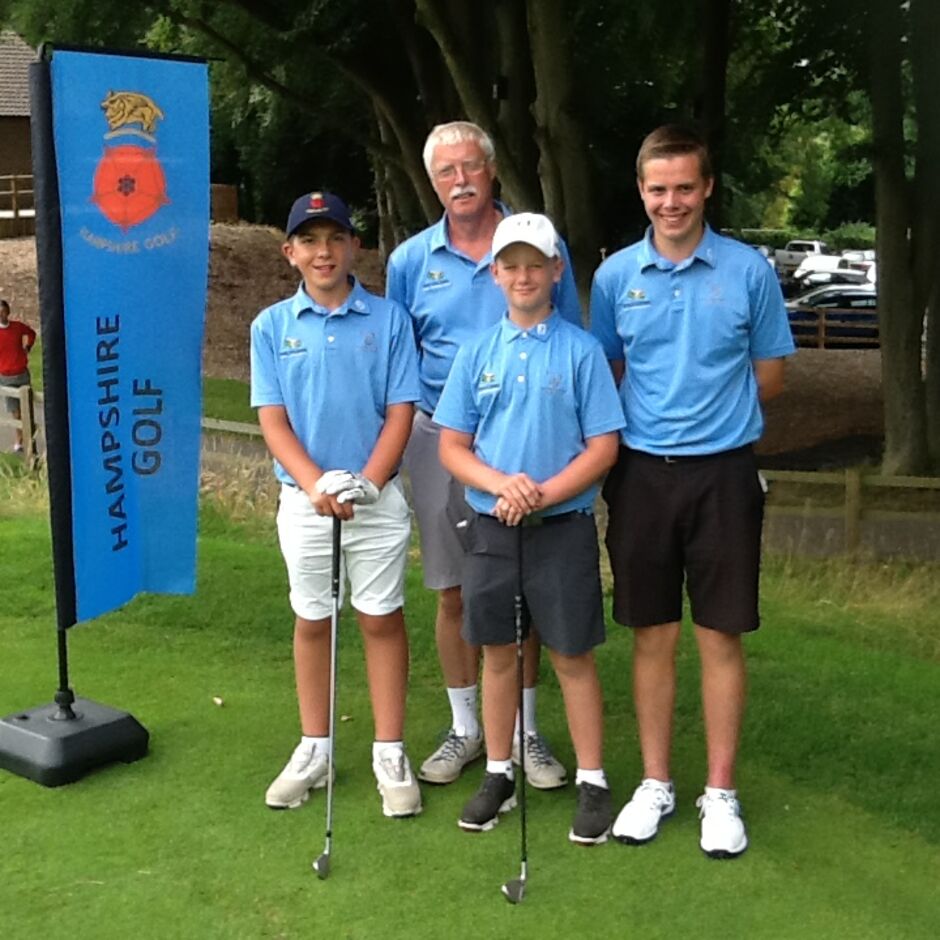 Congratuations to Bramshaw Golf Club on winning the Green Jackets Cup for the first time. They defeated La Moye in a very close final at Hockley.

The format of the Green Jackets was changed for 2016 to encourage more Golf Clubs to take part. It is now a mixed event, played off handicap as an aggregate stableford. The changes to the format saw a 20% increase in entries and it is hoped that more Clubs will enter in 2017.

Entry forms for 2017 will be available here in November.

Congratulations to SHANKLIN & SANDOWN GOLF CLUB. They beat Barton-on-Sea GC in the final of the Green Jackets at Hockley on Tuesday 28th July.