Jersey's Jo Hacker emerged the victor at the end of three gruelling days of golf at North Hants Golf Club in Fleet. 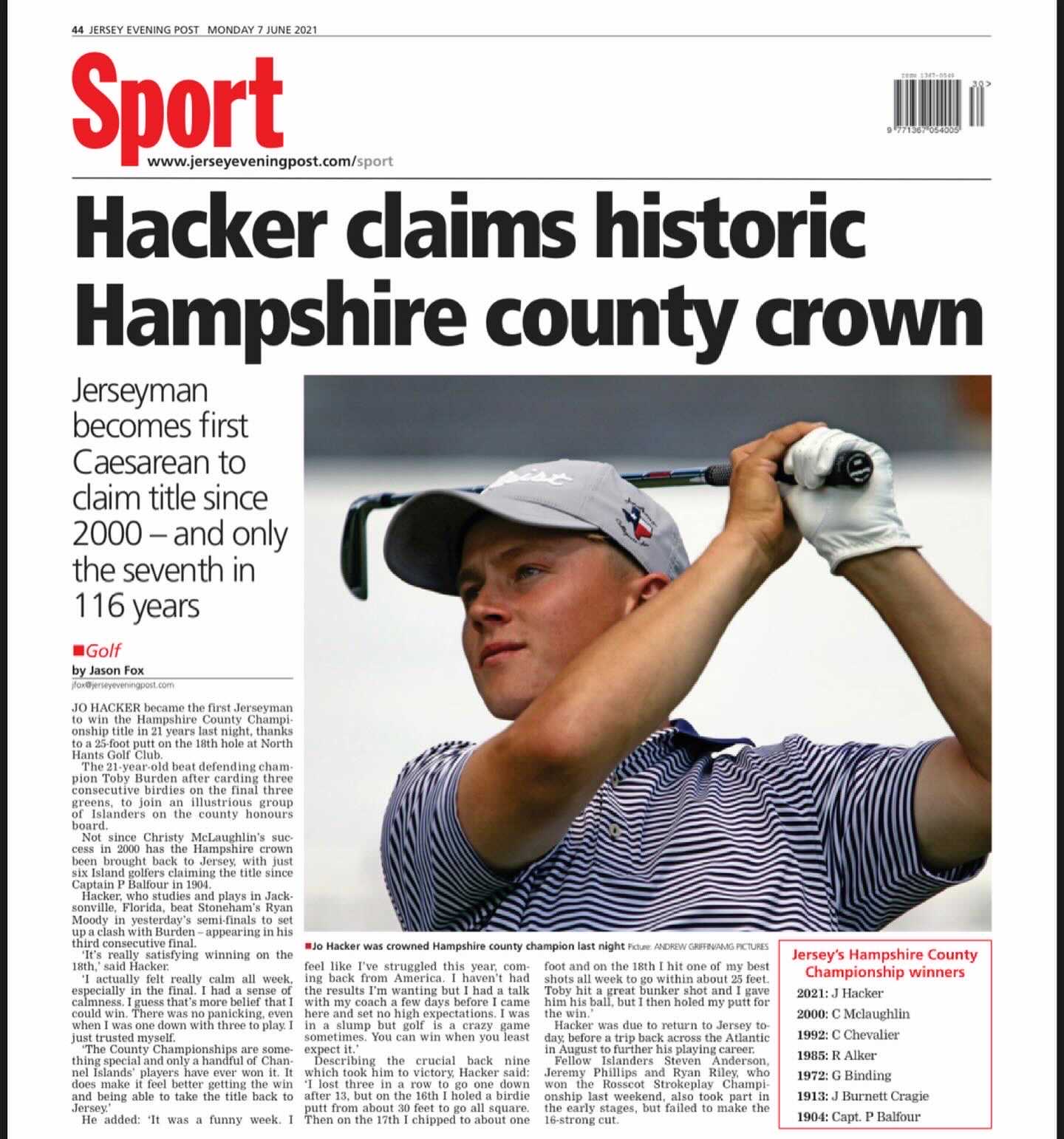 The Jacksonville Dolphins golfer based at Sawgrass, the home of the PGA Tour, produced a stunning finish to end Toby Burden’s dream of a second Sloane-Stanley Challenge Cup win in three years.

Hacker, a two-time Jersey and Channel Island Junior Champion, made three birdies in a row to come from one down with three to play.

The 21-year-old then coolly rolled in a 25-footer for birdie to stun his opponent, who must have been resigned to extra holes after finding the front trap at the 18th.

Hacker had hit a remarkable recovery for the second hole in a row after finding a poor lie after missing the fairway on 18, after his tee shot clipped a nearby tree.

The Jersey boy’s flushed iron made light of the lie and finished pin high, while Burden from the middle of the fairway took a direct line at the pin tucked behind the trap.

Having lost on the last to a birdie by Rich Harris when the two Hayling members contested the 2020 final, played in September, Burden had that sinking feeling again as he could only watch his opponent coolly roll in the putt from distance, as he had on 16 to get back to all square, before confidently raising his hat to acknowledge the smaller than usual gallery following the match.

In all fairness, as the finalists began their sixth round in three days, the standard was a little scrappy as the lead swung one way, and then back again over the front nine.

After both took bogey fours at the long par three first, Hacker was set for a birdie putt when Burden conceded having made five at the second.

From one down, a birdie four by the Hayling man restored parity at the par five third.

Burden made another birdie at the fourth to take the lead for the first time, only to hand it straight back with a bogey five at the fifth.

He bounced back with a birdie at the sixth to lead again, but another five at the seventh put him back level for a third time.

A three-putt on the ninth put the two-time Channel Island and Jersey Junior Champion in front at the turn.

And when Burden could not get up and down from the sand on the 10th, he found himself two down, just as he had at Hayling nine months ago. 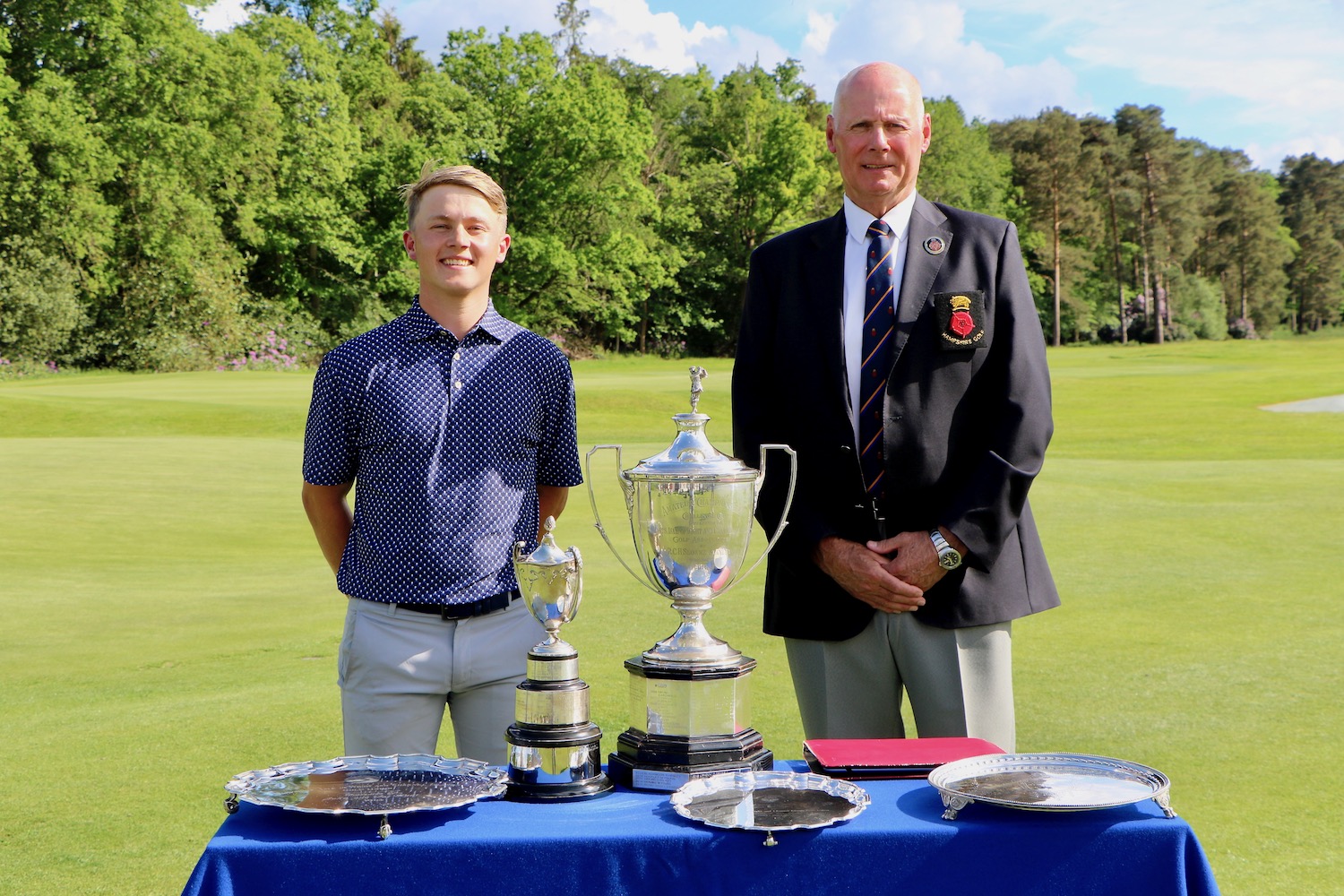 Burden had held the Slone-Stanley trophy for an extra three months after his first victory in 2019 at Aldershot’s Army GC, just a couple of miles away across the Hampshire-Surrey heathland between the two towns.

But his hopes of regaining the trophy, having become a dad for the first time since last year’s final, looked to be slipping away.

The pain of three final defeats may have galvanised the 34-year-old however, as he responded with an excellent birdie at the 11th from 15 feet, and then saw Hacker make a mistake at 12 to make it a short-lived lead.

Burden then birdied the short 13th to get back in front for the first time in seven holes, and after the next two holes were halved in par, Toby could start to dream of joining the 21 players to have won a second championship.

But Hacker’s bold play on the uphill 16th, taking driver on the 425-yard 16th was rewarded as he rolled in a downhiller from 22 feet, to make it all-square.

Hacker missed the green in two on the par five 17th but then almost holed his 'bump and run' chip shot from 30 yards.

Burden's chip from the front of the green also grazed the hole but left him with a tricky three footer which he safely negotiated.

As both players walked away with fours, the watching Hampshire Golf officials were left trying to remember the last time the final went to extra holes.

But that birdie settled the final there and then – cruelly for Burden, who also lost to a birdie on the last against Richard Harris nine months earlier. 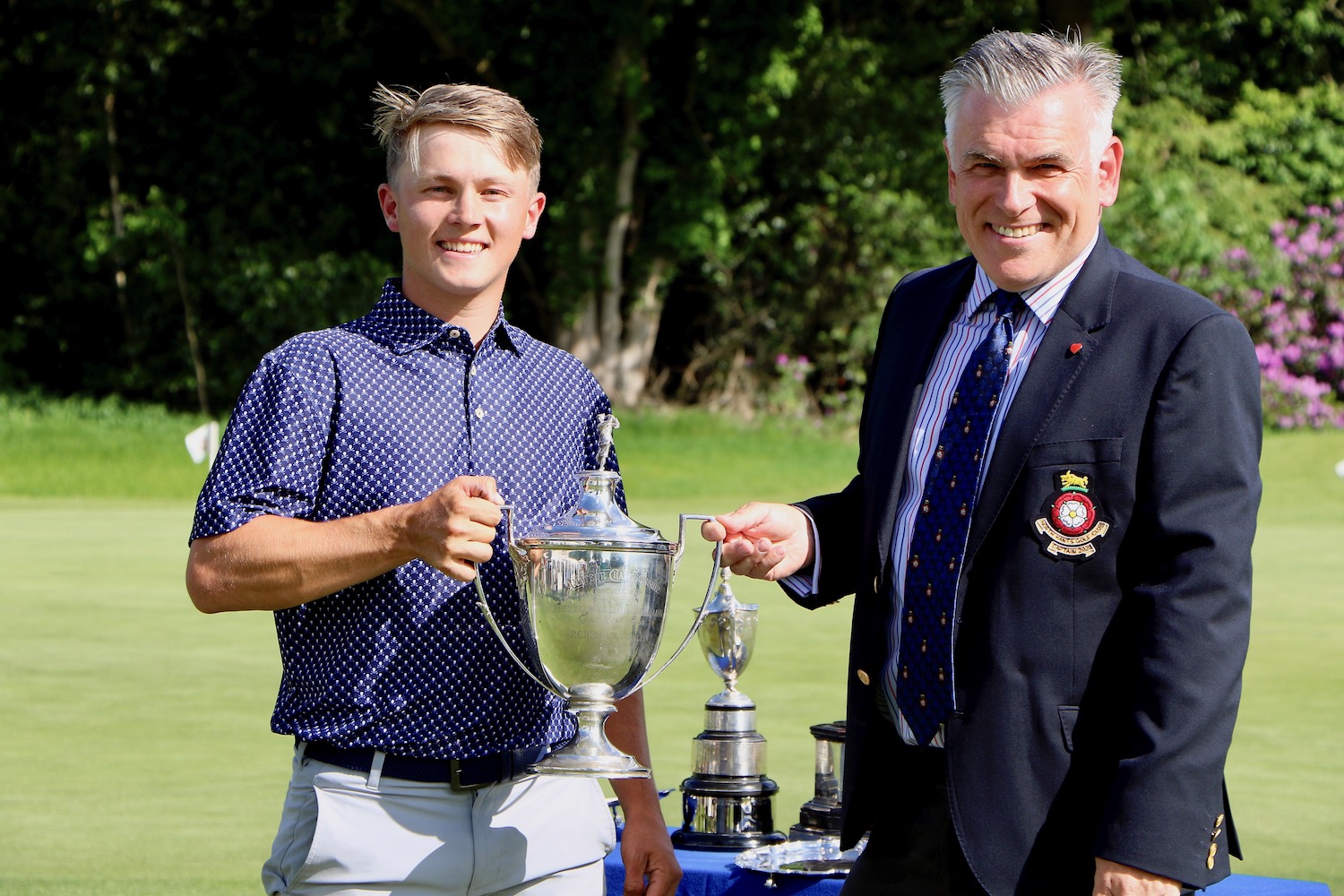 In a topsy turvy game Hacker was up early by winning the 2nd hole. Burden struck back at the 3rd and 4th to go one up. The lead was exchanged a number of times over the next 11 holes, and by the time the players turned for home at the 15th hole Burden was still 1 up.

Hacker then put in a stunning birdie burst for the next three holes - winning the 16th, halving the 17th and then finally holing a 25' sliding put across the green at the 18th (having already conceded Burden's escape from the left bunker) to win the hole and the match - thus becoming County Champion for the first time and the first champion from Jersey for 21 years.

Congratulations to Jo - and commiseration to Toby who was playing in the final for the 3rd consecutive year - having won at the Army in 2019 and lost at Hayling in 2020.

Many thanks to North Hants Golf Club for allowing us to host the Championships on their beautiful golf course - which was presented in magnificent condition.

Jo's progress through the Knock Out stages of the competition (after qualifying in the 36 hole medal competition on Friday) can be seen below. 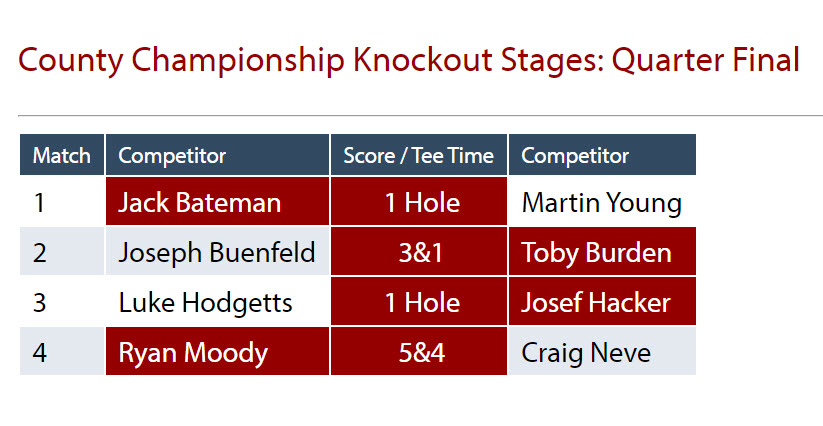 Round of 16 - Played Saturday morning 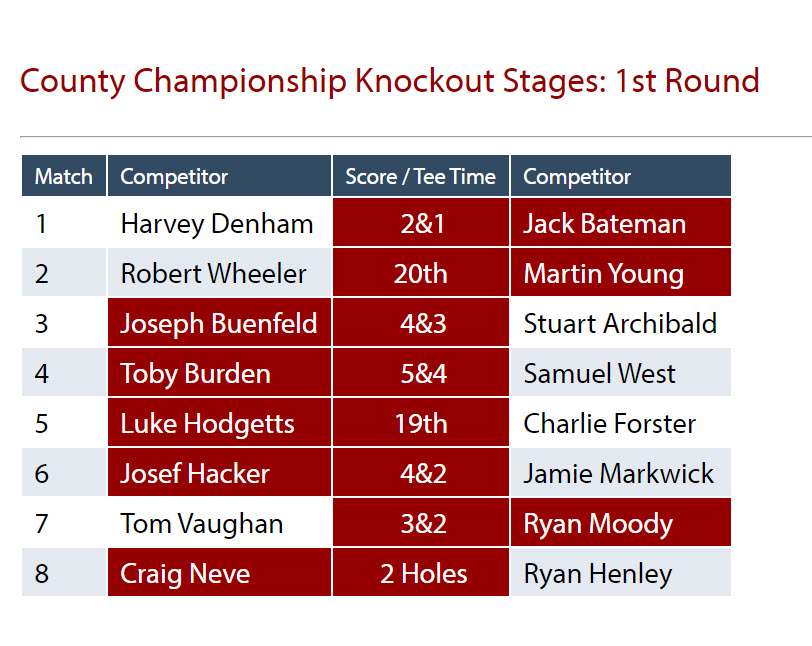